Record champions Hearts of Oak brushed aside third-tier side Windy Professionals with a 4-1 win to advance to the Round of 16 of the MTN FA Cup. The Round of 32 encounter which took place at the Accra Sports stadium on Sunday saw the Phobians annihilate the Winneba side in a five goal thriller. Daniel Afriyie Barnieh, Emmanuel Nettey, Benjamin Afutu and Manaf Umar got on target for the ten-time champions as Frank Okine pulled one back for Windy Professionals.

Earlier on Saturday, holders Asante Kotoko beat Thunderbolt FC 3-1 to advance. Evans Adomako scored a brace for the Porcupine Warriors with Emmanuel Gyamfi adding the third goal as Philemon Kyei got the consolation for

At Aiyinasie two-time winners Medeama SC  staged an upset against Karela United at the CAM Park. The Tarkwa side scored two goals in either half to beat the home side 2-1. Prince Opoku Agyemang opened the scoring in the first half, capitalizing on a defensive howler. Ebenezer Ackahbi increased the tally with a superb finish before Diawisie Taylor pulled one back for the visitors.

Former champions AshantiGold SC came from a goal down to beat third-tier side Aboi Young Stars 2-1 at the Sameraboi town Park. David Abagna netted in the 8th minute before Opoku Agyemang scored the second goal three minutes from time as they cancelled Justice Opei’s 7th minute goal for Young Stars. The win takes AshantiGold to the Round of 16 of the competition.

MTN FA Cup Round of 32 Results: 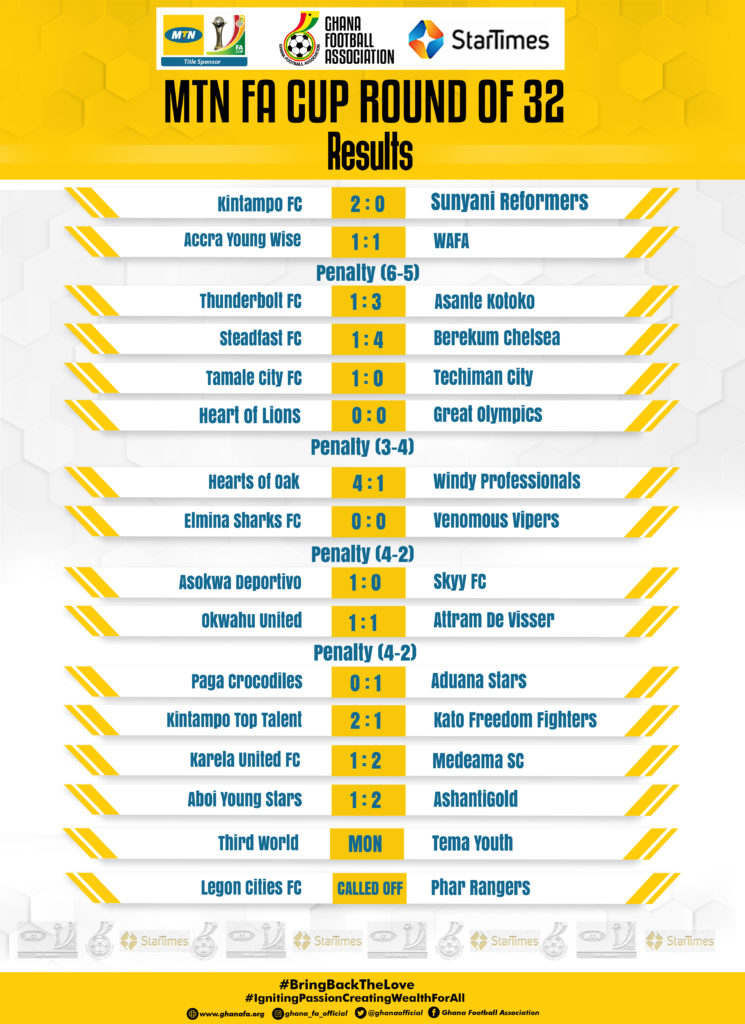 Check The Details Of The ‘Misunderstanding’…